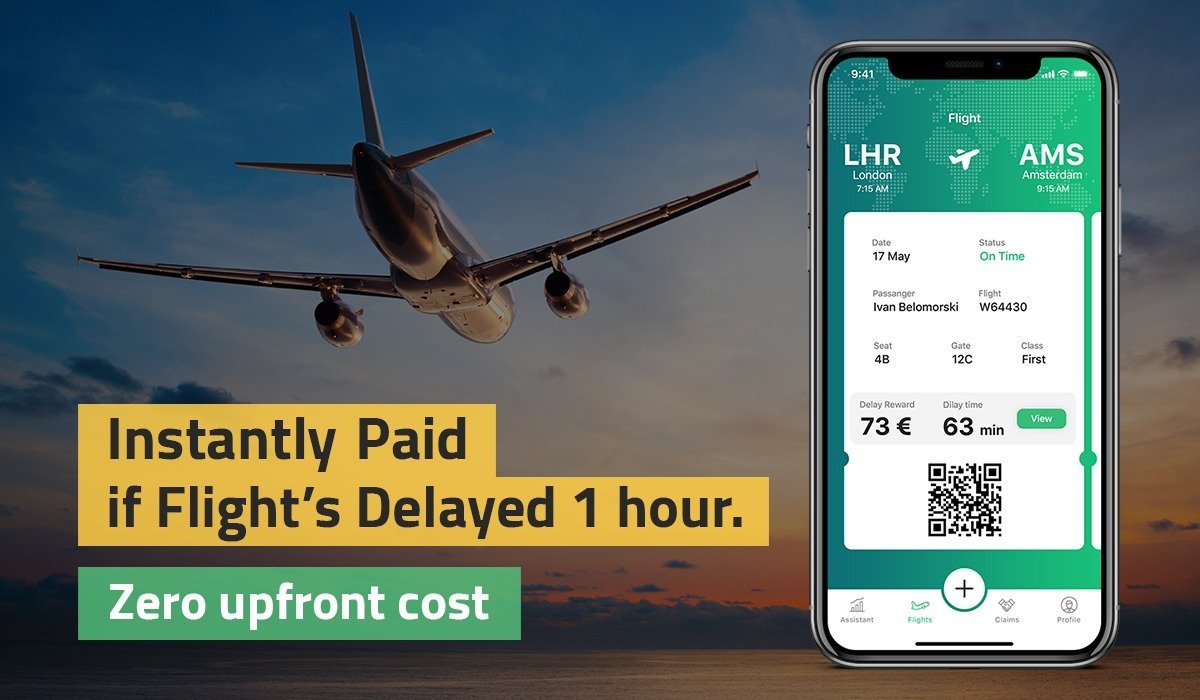 Every traveler knows the feeling. You pack your suitcase, grab a taxi, get to the airport on time. You’ve done all you can to get to that meeting or that concert you’ve been looking forward to for months. Then you see your flight has been delayed. Maybe an hour, just so it ruins your plans for the night. Or maybe enough to make you even miss the show.

Did you know that you’re eligible for compensation under the EU 261/2004 directive?

That is, if your flight is delayed over 3 hours. And only if the airline is responsible. Even if both conditions apply, airline companies make it hard for travellers to get their compensations – it may take months of back-and-forth emails or going to court. It’s no wonder 85% of eligible claims are never filed.

We hate it too. It’s not fair and someone has to do something about it.

Had to… Because we at Colibra are on it. In fact, this injustice gave birth to our app.

Colibra gets you an instant compensation between 20 and 100 EUR every time your flight gets delayed over an hour. Whatever the reason. No need to pay anything yourself, before or after. You don’t even have to file a claim – Colibra does that for you. All you need to do it scan your boarding pass in our boarding pass wallet app, and then wait.

Sounds too good to be true? Here’s how the magic work

Your rights and odds of being compensated

The EU 261/2004 directive obliges airlines to compensate every flight cancellation or delay over 3 hours they’re responsible for with up to 600 EUR (average claim payout varying between 300 and 400 EUR). Ironically not every flight that is cancelled or 3+ hour late is eligible for payment. That’s because in ⅔ of the cases the airline is not guilty about the delay or cancellation (weather, other delayed flights, etc.). So even though that one in 200 flights get cancelled or delayed 3+ hours, in reality the odds of being compensated for a delayed/cancelled flight is around 600 to 1 making it quite unlikely to receive anything.

Ok. Your flight is delayed over 3 hours (or cancelled). You approach the airline staff to tell you what happened and who’s fault it is only to be told that they have no such information. Oops.

Next you have the following 3 choices:

1. Start an exhausting email thread with the airline requesting information about your flight and wait for them to send you some vague answers.

2. Hire a lawyer to check the flight’s case. Pay out of pocket for legal counselling only to find out after weeks that your flight is among the ⅔ not being paid because it’s not airline’s fault.

3.  Hire a flight compensation agency to do the work for you. Again ⅔ of the time they tell you “Sorry, you’re not eligible for any compensation although you waited 3-4 hours at the airport” or if you’re eligible pay you your compensation in several weeks or months.

Colibra democratises flight delay compensations so we all get a fair & guaranteed chance at being compensated for the inconvenience, even if the flight has delayed with just 1 hour and due to weather without you having to pay anything upfront or after.

The way we can afford to pay everyone, every time due to any reason a flight is delayed do this is as follows:

Rather than having each passenger go through an administrative odyssey, Colibra application files a large pool of compensations claims on behalf of its users who are eligible for compensation under EU261. Then, instead of paying a few lucky guys a couple hundred EUR, like competitors, we spread the total pool of claimed compensations among many more travellers who also got their flights delayed or cancelled. We thus guarantee each of our users a fixed, instant compensation without the need of claiming anything. No exceptions. All we charge for this is a percentage from the total pool of eligible claims we distribute. This way, clients don’t have to pay anything for using Colibra – neither before, nor after and they can instantly get compensated every time they have a flight delays.

A game changer for travellers.

1. Lowers compensation eligibility from 3h to 1h (30x increase in chances to qualify for a compensation)

The Cost You Pay Indirectly

There IS a cost to this innovative service you pay, of course. Compensating tens of thousands of travellers for their delayed flights is not cheap. The question is who is paying. The short answer is: Airline companies. The long one, however, is a bit more complex and lies in the careful redistribution of eligible claims. Here’s what we mean:

Imagine you download Colibra and you use the the app to opt-in for an instant and fixed flight delay compensation of 50 EUR if your next flight is delayed over 90 minutes (yes, you can choose the delay time after which you are paid). To confirm, you agree to our terms and conditions that in the case of a EU 261/2004 event (your flight is 3+ hours late/cancelled and the airline is responsible), you transfer your rights to receive your compensation of to Colibra. This way, we can pay you and many other travelers 50 EUR each. In other words, you swap you right to receive a hypothetical compensation in favor of the much more democratic and probable scenario of getting a spare 50 EUR the moment your flight lands. Not just once, but every time there’s a delay and without effort or having to pay anything.

Is This Worth It, Though?

Let see what the math says. Suppose you have 10 flights per year. With a 600:1 chance of a flight being cancelled or delayed 3+ hours, you have a 60:1 chance of getting 300 EUR. Even if you choose to take the riskier 600:1 bet, you still have to claim the potential event yourself and go through the lengthy administration procedures with your airline. The airline company is naturally reluctant to pay and will hinder or postpone the payout as long as possible. Your best chance is to hire a representative but you would still need to wait for weeks or months until you receive your compensation.

Now let’s imagine you’ve chosen to swap your right to receive that EU 261/2004 compensation and instead you’ve agreed to Colibra guaranteed 50 EUR every time a flight of yours is over 90 minutes late. Be it due to bad weather, strikes or a technical issue, the chance of a flight being 90 minutes late is up to 30x greater than having a 3+ hour delay.

This means that the odds of receiving 50 EUR at any given flight are 10-30x higher. Much better, if you ask us. And a lot fairer. if we consider a longer period (say, a few years), you actually get the same expected flight compensation amount per flight, mathematically speaking.

2. More likely – due to the much higher probability of a flight being 60+ minutes late, compared to a 180+ minute delay or flight cancellation.

3. Guaranteed – No matter the season or the reason – if your flight is late, you get paid. We’re good at rhyming, too.

And that’s not all. Colibra will be adding many new FREE benefits to the application in the months to come, making your trip so much more fun and enjoyable.